In Case You Missed It: March 2022 Edition 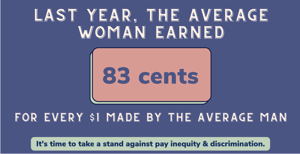 "...83 CENTS: THAT’S HOW MUCH WOMEN IN THE U.S. WHO WORK FULL TIME, YEAR ROUND ARE PAID FOR EVERY DOLLAR PAID TO MEN.

Equal Pay Day marks the day into the year on which it takes for women on average to earn what men did in 2021.

"...Salary compensation is not the only thing employees want. For employees who never considered resigning, job satisfaction and work-life balance ranked higher on their reasons for staying at their company than competitive pay.

Pay increases remain a strong retention and talent acquisition tactic. For employees who considered leaving but remained at their company, competitive pay is one of their top reasons for staying. Even as job satisfaction and work-life balance climb higher on candidates’ priorities, better pay remains one of the top ways to both attract the talent and keep employees–especially ones who are less satisfied. See our 2022 Social Media Recruiting Playbook for winning examples of how to broadcast your pay increases to prospective candidates on social media.

The majority of Americans got a pay raise, but a gender pay gap persists. Across the board, women are less likely to get a raise, and when they do, it’s a lower pay raise than what men receive on average. Which is possibly one of the reasons why 20% more women than men who haven’t yet quit said they simply haven’t found the right job yet.

Retention is not a losing battle. While many employees did quit during the Great Resignation, the overwhelming majority of employees stayed, and the vast majority didn’t even think about quitting. Keep focusing on making your employees happy–it’s still a highly valuable talent acquisition strategy. Plus, happy employees not only lead to higher retention but also lead to increased employee advocacy and employee referrals.

Why male allies are so important for gender equality in sport 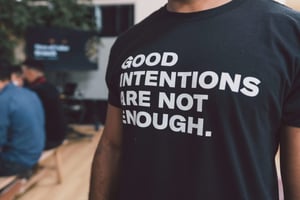 This blog was written by Michelle Redfern, Strategic Partner and Senior Consultant based in Melbourne, Australia, and was originally published on her blog.

I have interviewed women who are athletes, coaches, administrators and board members about their experiences in sport. They are funny, forthright and above all, worth listening to if you are serious about gender equality in your sport. This series will be in a different format to our previous two reports. We’ll be releasing video interviews supported by a written report for each woman interviewed. So you can watch, listen and read about how to make sport a much more equitable place for women. ..."

"... Yet, despite this international popularity, International Women’s Day is only nominally celebrated in the United States. Why? Because of its association with “socialist” ideals, something seen as at odds with American individualism. This was particularly true in the decades after World War II when, because of the Cold War, a harmful divide emerged between feminist movements and women’s labor movements in America. The intersectional bonds of early feminists — women of all classes fighting for suffrage and worker protections side by side — loosened, and when a mainstream feminism re-emerged in the 1960s, it left many women of color and working-class women behind, although they later fought for inclusion.

Many feminists today are striving toward intersectionality to right these wrongs. But the pandemic has exposed that the United States has a long way to go in supporting workers who are women, particularly working mothers.

It is telling that the United States loves to celebrate mothers in May with flowers and brunch and with similarly apolitical nods, mostly on social media, on International Women’s Day. But it has largely ignored real policy shifts that the rest of the world has adopted and continues to advocate for on March 8 to support working mothers. ..." 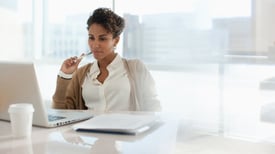 "... The pay gap between male and female executives at U.S. companies expanded during the pandemic after years of improvement, according to a new analysis by financial research firm Morningstar.

In 2020, the first year of the pandemic and the most recent year for which pay-disclosure data is available for publicly traded companies, the gender pay gap in the C-suite became wider, "a reversal of the narrowing that occurred between 2015 and 2019," wrote Jackie Cook, director of stewardship, product strategy and development at Morningstar. "Indeed, female C-suite pay as a percentage of pay earned by their male counterparts fell to a record low for the nine-year period since 2012," she noted. "While the number of women at the top of the corporate ladder has inched up, women will have to wait until 2060 to reach representation parity at the present rate of progress."

The data used in the analysis was sourced from annual proxy statements filed by S&P 500 companies, which represent the largest publicly traded U.S. companies. Public companies are required to annually disclose the pay of their chief executive officers, chief financial officers and the next three highest-paid executive officers.

SHRM Online has collected the following articles on the pay gap between men and women, at the executive level and throughout organizations. ..."

Hear What People are Saying About Our Best-in-Class Workshops 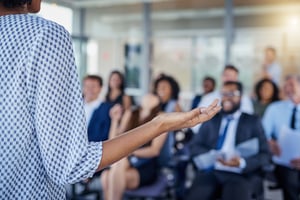 "This presentation was the most unique and informative leadership presentation I have ever attended. The insight that was presented was new, fresh and will be integral for all that attended (women and men of all ages) that wish to enhance their careers. Just phenomenal!"

“Great presentation and information!...Practical advice related to the topic, excellent storytelling…this stood out because of the amount of research they used in the presentation…Fantastic!!” ..."