Tracking the Business Case - Research from Around the Globe

We use this blog to track the research into the correlation between the % of women in senior management and on boards and measurable business performance. It is updated as research comes in. You'll find related information on correlation v. causation here.

Female CEOs increased sales per worker by 14% in companies where at least one-fifth of the workforce was women, research shows.

Quantopian, a Boston-based trading platform based on crowdsourced algorithms, pitted the performance of Fortune 1000 companies that had women CEOs between 2002 and 2014 against the S&P 500’s performance during that same period. The comparison showed that the 80 women CEOs during those 12 years produced equity returns 226% better than the S&P 500."

The Credit Suisse Gender 3000, showed the return on equity for companies with women in more than 10% of key positions was 27% better than for those with less than 5 percent and the dividend payouts had a 42% higher ratio. The study by the Credit Suisse Research Institute tracked some 28,000 executives at 3,000 companies in 40 countries. 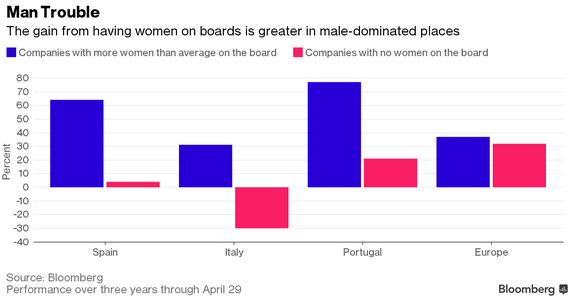 "Improving gender equality would add at least $2.1 trillion to U.S. gross domestic product by 2025, according to a McKinsey Global Institute study, a boost roughly the size of the Texas economy."

"...companies with at least three female board members outperformed others in overall return on equity by more than 36 percent, according to a 2015 study by consulting firm MSCI. Not only did they make more money, but they were more likely to stay out of trouble.

"We found that companies lacking board diversity suffered more governance-related controversies than average," wrote Linda-Eling Lee, a director of research at MSCI and a lead author of the global study. "We did not, however, find strong evidence that having more women in board positions indicates greater risk aversion."

“The results are clear,” writes Christine Lagarde, managing director of the International Monetary Fund, in a blog this week: “increasing female participation improves the bottom line.”

The new IMF study, released in time for today’s International Women’s Day, isn’t particularly groundbreaking. Others have already found that an increased number of women at the top of firms is correlated with an improvement in the bottom line. But the new study is large (pdf), drawing on data from 2 million firms across 34 European countries.

The study confirms that firms with a larger share of women in senior positions made more money. One additional woman in senior management or on a corporate board (where the size of the board remained unchanged) was associated with a 3-8% higher return on assets.

New data from the Peterson Institute for International Economics and EY bolsters that case. The groups analyzed results from 21,980 global, publicly traded companies, in 91 countries from various industries and sectors and showed that having at least 30% of women in leadership positions, or the “C-suite,” adds 6% to net profit margin.

The earliest study we know of was published in 2004 by Catalyst. Their findings show:

A McKinsey study found a 10% higher profit margin for companies with more women on the board.

A decades-long study of Fortune 500 companies by the Glass Ceiling Research Center at Pepperdine University showed that the companies with the very best records for promoting women tended to be the most profitable.

Gender-diverse companies are 69% more profitable, according to a study published several years ago in the Harvard Business Review.

“We calculate that if the U.S. were to increase women’s labor-force participation rate to that of other advanced countries, it would add an average of 0.2 percentage point annually to GDP in the coming decade—which translates to a cumulative $455 billion in output above S&P Global’s baseline forecast for growth,” the report said. Quoting from this MarketWatch article.

There are more studies, but we think these should suffice.

And some not-so-obvious reasons...

"Much the way the gender pay gap can’t be boiled down to one single cents on the dollar figure, Pittinsky illustrates that there are nuanced ways to approach support for diversity and inclusion in the workplace."