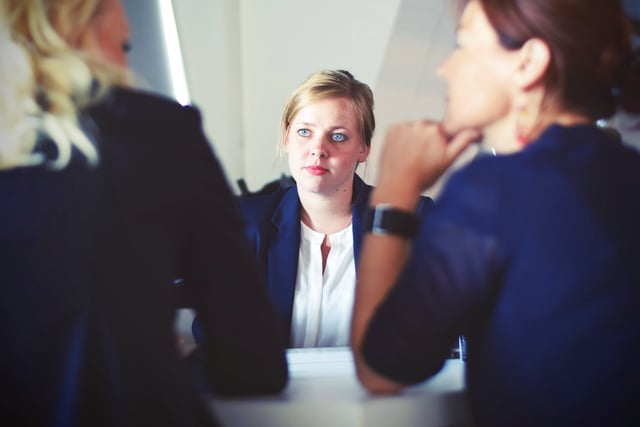 Recently, a podcast host asked me if I’d be interested in doing an interview on gender differences in leadership styles. More specifically, the host wanted me to chat about how women are much more inclusive leaders than men. On the surface, this seems like a positive development for women, and something that’s worth crowing about. It’s also got a lot of traction: viewing women as more inclusive leaders seems like something that will finally get them into the C-suite en masse, no?

No matter how positive it might seem on the surface to point out the “innate” characteristics of female leaders, it never leads to the kind of change we want. Read on to learn about the sinister side of gender essentialism, and how defining women leaders differently doesn’t serve them.

The dark side of self-transcendence

Studies do indicate that women have different leadership styles than men. Traits like benevolence, empowerment, and engagement seem to pop up again and again in these studies—all very positive, all very feel-good. A 2005 study by Caliper, a New Jersey-based management consulting firm, showed that women “demonstrate an inclusive, team-building leadership style of problem solving and decision making.” How sweet! When scientists looked at female Swedish corporate board members, they found that these women valued the “self-transcendent” values more than their male colleagues (“like benevolence and universalism”), while those same male colleagues valued “self-enhancement” traits like achievement and power.

So women are more inclusive leaders than men. What’s wrong with that? At face value, nothing—especially when you consider that much of success in middle management rests on a person's ability to engage and motivate teams to get things done. Women, it would seem, are perfect for that job.

But what if a woman doesn’t want to stay in middle management?

The problem with focusing on these supposedly female leadership traits is that they end up pigeonholing women into middle management, where people are indeed paid to develop teams to get things done. And while middle management is a fantastic career choice, it can turn into something of a holding pen for talented women who want to move up the career ladder but don’t have the opportunities—or even the inter-company status—to do so.

This pigeonholing works shockingly well. A 2015 report from the International Labor Organization showed that in middle management, we have achieved true equality: women hold 50% of these positions! The UK’s Chartered Management Institute revealed similar findings, demonstrating that women hold 60% of junior manager positions and 40% of middle manager positions.

On the surface, this seems like wonderful news, until you dig a little deeper and look at how drastically the numbers drop once you move up the corporate ladder. That same ILO report demonstrated that “less than 5% of CEOs of publicly listed companies in OECD countries are women and just 2.8% in the European Union.” The Chartered Management Institute showed that only 20% of senior level jobs are held by women, and once you get to the CEO level, that drops down to single digits. In the US, only 6.4% of Fortune 500 companies are run by women—and that’s the highest percentage of female CEOs this country has ever had.

The gender diversity in middle management is a start, but it’s certainly not a finish. Since female workers get classified as having a very specific set of leadership roles that’s suspiciously perfect for middle management (but nothing higher!), they get boxed into roles that don’t pay as much and don’t offer as much opportunity for promotion.

And that’s why I refused to do the podcast interview. I believe that when we constantly hammer home the idea that women are “good with people!” and “all about team-building!” we end up—consciously or not—pigeonholing them into middle management forever. While team-building is vital for a middle management job, it isn’t the skill that people are looking for in executives.

Senior leaders are paid to position their organization in its marketplace. “Typical” executive traits often include things like leadership, vision, having a global outlook, and strategic thinking. Are these traits that solely belong to men? Of course not—but they’ve certainly been marketed that way.

We need to start focusing on women’s potential for these sorts of eagle-eyed positions if we want to help women break out of middle management and race to the top. Instead of encouraging them to flex their team-building muscles, we should emphasize the importance of understanding the marketplace, and give women the appropriate relationships and connections so that they can shape markets themselves. At the end of the day, a woman’s capability to represent her organization to the external world will be what enables her to be seen as a viable candidate for roles like CEO.

The more we focus on how good women are with people—no matter how empowering it seems in the moment—the more we contribute to keeping women mired in the middle.